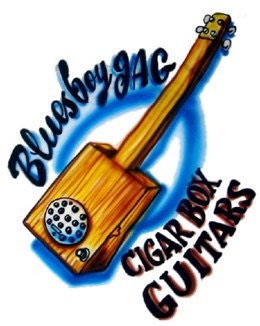 " A one of a kind professional stage instrument
that will turn heads and last a lifetime."

FREE How to Play A CBG CD and Slide with Every CBG order!

Why Does A Cigar Box Guitar Have Only Three or Four Strings?

Usually because the necks can be purchased at any hardware store pre-cut. They are just the right thickness for 4 strings. A regular 6 string guitar neck is tapered and that takes time, hardware an expertise to perfect.Also, the original cbg's from 50-100 years ago used the very common 2x4 which was plenty wide enough for 3 or 4 strings, making a tenor guitar an obvious choice.

The early CBG's were 3 or 4 stringers for this reason as well. Most people like playing a 3 or 4 stringer as opposed to 6 because it looks cool and it looks home made. A 6 string guitar is 3 more strings than you need to make a major chord anyway. Many people played a baritone guitar which is simply a large ukulele tuned like a guitar. It has four strings, with the smallest at the bottom and the largest at the top.

I like playing a 4 string for the following reasons:

1. I can play more songs easily because I can hot more notes without moving all over the neck.

2. I can play a major chord while still keeping the low notes.

3. I can play licks that no regular 6 string or 3 string cbg can play because the top string is the third of a major chord. Interesting parallel melodies can also be played fingerstyle on a 4 string.

4. Three strings isn't enough strings for a regular width CBG neck, there's too much room at the top and bottom of the neck and your slide tends to bump against this area making unwanted noise.

Take a look at what you can do with just three strings. These kotos are EXACTLY the same as my ftretless three stringers btu they are using nylon strings instead of steel.

Plus, when you play a 3 or 4 stringer, you REALLY get attention at gigs :)